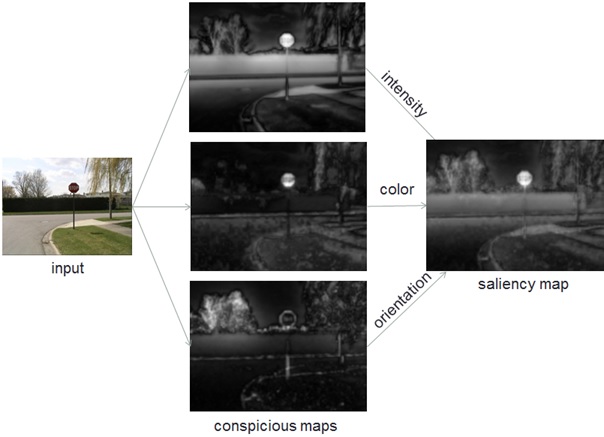 Saliency model predicts what attracts the attention. The results of such models are saliency maps. A saliency map is a topographic representation of saliency which refers to visually dominant locations.

The aim of the project is to implement Ittiâ€™s saliency model. It is a hierarchical biologically inspired bottom-up model based on three features: intensity, color and orientation. The resulting saliency model is created by hierarchical decomposition of the features and their combination to the single map. Attended locations are searched using Winner-take-all neuron network.

First, the features are extracted from an input image.

Intensity is obtained by converting the image to grayscale.

For color extraction the image is converted to red-green-blue-yellow color space.

The next phase consists of creation of Gaussian pyramids.

Center-surround organization of receptive field of ganglion neurons is implemented as difference-of-Gaussian between finer and coarser scales of a pyramid called a feature map.

The final saliency map is a mean of the conspicuous maps.