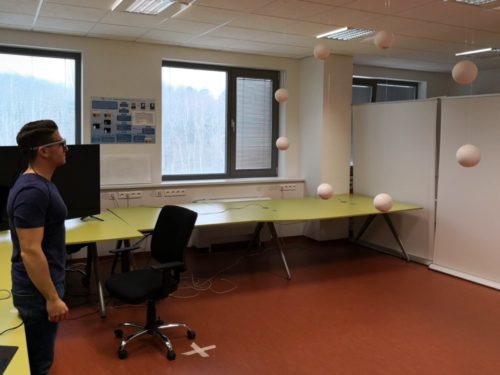 Abstract. Depth cues are important aspects which influence the visual saliency of objects around us. However, the depth aspect and its quantified impact on the visual saliency has not yet been thoroughly examined in real environments. We designed and carried out an experimental study to examine the influence of the depth cues on the visual saliency of the objects at the scene.The experimental study took place with 28 participants under laboratory conditions with the objects in various depth configurations at the real scene. Visual attention data were measured by the wearable eye-tracking glasses. We evaluated the fixation data and their relation to the relative objects distances. Contrary to previous research, our results revealed a significantly higher frequency of the gaze fixations on objects with higher relative depths. Moreover, we observed and evaluated that the objects which ”pop-out” among others in the depth channel tend to significantly attract the observer’s attention.